The Lafayette Tank, a water tank that holds 10 times the amount of water that falls over the Niagara Falls every second, needed a fresh coating.

To coat a tank of this proportion would take a large coating crew, reliable blasting and coating machinery and a lot of communication. Luckily, our team was equipped to handle the task! 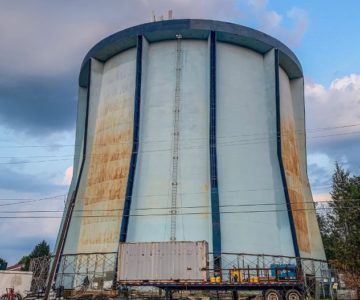 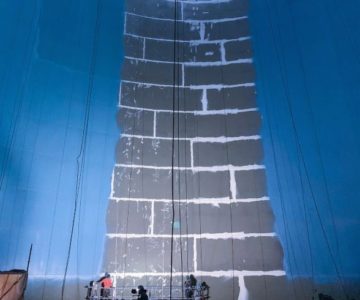 A job this massive requires a lot of coordination, including, proper safety guidelines to ensure the surrounding environment wasn’t impacted by the blasting.

SSI’s COO, Eric Houghton, notes, it was important “to make sure all the spent abrasive and paint chips were captured within the containment system and that this was all contained and exposed properly.”

Grit recyclers, like the ARS, do just that. These machines use abrasive grit to prepare the steel surface for a new coating while simultaneously collecting waste. Once captured, the used grit is separated in order to allow the system to efficiently recycle the quality abrasive over and over again.

Another challenging aspect that needed to be addressed was the antennas on top of the tank. Tom Sulkowski, president of USTP, explains, “To do a good blast job, you have to remove all the antennas and take them off the tank. Because we were doing the abrasive blasting, any time you use that type of grit, it can damage antennas, damage the cables, and we don’t want to be held responsible for that. Plus, you have to take it off the tank in order to get to those inaccessible areas. They want a job that’s 100 percent. They don’t want a job that’s 98 percent around antennas.”

To complete 70,000 square feet of blasting took a crew of 6 and a little over 3 weeks. Once surface preparation was complete, it took about 9 days of painting.

For temperature control, the job required a line of Allmand and Frost Fighter heaters along with dehumidifiers to cure the coatings and keep the job running on time.

Although we were met with several challenges along the way, we are happy to have successfully restored the tank with a new coating system!